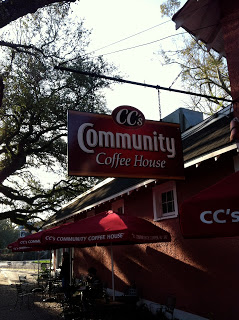 I took this pic this morning, thinking it might make a good “return” photo.

I remembered that, when I lived in Pennsylvania or Ohio, a vacation week in Louisiana always included a return, with my sis, to one of the Louisiana-based coffee shops called CC’s Community Coffee House.

I aimed my phone at the CC’s sign, thinking about my return to Louisiana about 5 months ago.  That more permanent move was a return to long-missed familiar things — crawfish boils, warm weather, Cajun accents, and CC’s.  Knowing I would be a “regular” there, I got my very own CC’s card.  I keep a few bucks on it, which makes it easy to return there often.

This particular CC’s is within walking distance of my New Orleans home.  I returned there this morning for a cup of coffee to take to the office.  I took the pic on my phone as I went in, because I had an inkling that there could be a connection with my CC’s habit and today’s word: “return.” There was the chance, too, that there would not be another better photo op later in the day.

I stepped up to the counter and ordered my usual: A grande, half dark roast, half medium roast, with room for cream. (The 2 dashes of cinnamon don’t take any room, so why mention that?)

The young barista seemed rattled, and I wondered what was so hard about my fairly ordinary order.  She said she was afraid that the CC’s card reader wasn’t working. She told me she wouldn’t be able to give me my receipt.

That CC’s receipt is my return ticket.  With the receipt, I could return any time that same day to any CC’s and present the receipt and the empty cup for a free refill.  It’s a nice perk. Still, I said “That’s OK. Don’t worry about the receipt.”

She tried again to get my CC’s card to read. No luck.  She didn’t want to tell me, so I asked: “It’s not charging the coffee to my card either, is it?” She nodded and tried the card again, and again, ever more flustered.  The coffee had been already been poured.  A line was forming behind me.

My move.  I offered to return to my car and get cash for the coffee. Relief poured off her face.

That’s how it happened that I got to return to CC’s in that same trip.  The photo was just right. 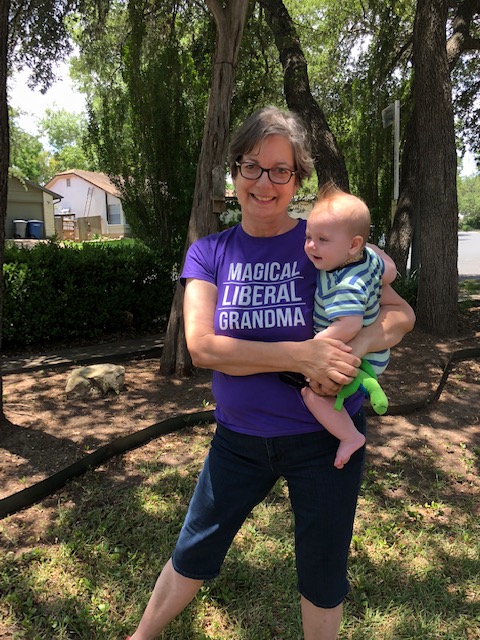