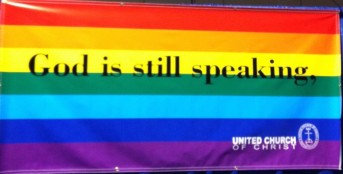 [From the five-year-ago me. This essay was originally published March 14, 2013 on Political Theology Network.]

My first call to pastoral ministry came to me when I was eight years old.

It was everything a call to ministry should be: in a church worship service, kneeling at the altar on a Sunday night, candle light and soft music. I looked up at the pastor in his robes and holy demeanor, and a clearly-voiced thought came to me: “I could do that.”

I dismissed the call as ridiculous. My own inner voice answered back just as clearly: “Girls don’t do that.”

I never asked anyone if that was true. I asked everything else of my Sunday School teachers. I asked about heaven and hell and why bad things happen to good people. I asked where, exactly, the bodily-resurrected Jesus was really living after all these years. These were questions I didn’t know the answer to. I was certain I knew the answer already to why “I could do that” was ridiculous. Simply this: “Girls don’t do that.”

Pastoral ministry was a man’s world, even in our United Methodist Church back then. I had seen exactly as many women pastors as I had seen pink elephants, flying saucers, and money trees. Still, I had heard of “pink elephants” and “flying saucers” and “money trees.” People could get a picture of those things, and they used those words, even though those things were imaginary. I never heard the word “woman” used as an adjective for “pastor” even in anyone’s wildest dream.

In the early sixties, I had not yet seen a female doctor or a female newscaster. The male newscasters, though, were reporting the beginnings of a liberation movement among women. “Bra burners” they were called and not with a tone of admiration. The movement proclaimed that a woman could get the education and experience to do whatever she wanted to do and to be whatever she wanted to be. Why, little girls could grow up to become doctors, lawyers, even astronauts!

The silence regarding pastoral ministry said, “Girls don’t do that.” I majored in science.

Now, in my sixtieth year of life and twentieth year as ordained clergy, I serve congregations in a very liberated and liberal denomination — the United Church of Christ — where women have been ordained since 1853, one hundred years before I was born. Who knew?

The congregations I have served would describe themselves on a spectrum from “open” to “liberal.” They have called women pastors. We have welcomed gay music directors and musicians. We have taken counter-cultural, courageous stands on issues from environmental justice to racial equality to world peace. We have even risked harboring refugees from Latin America.

We would never say, today, about pastoral ministry: “Girls don’t do that.” Not in those words.

What we say is: You are welcome here if you can see yourself in the word “man.”

Here we are, in the second decade of the 21st century. How can it be that, in the year 2013, worshipping women and girls are still expected to mentally translate “men” and “man” to mean us?

Around some worship committee tables, this is still being debated, with passion. The use of inclusive language is seen as just another example of giving in to “political correctness.” Presenting alternatives to exclusively male language can still get you labeled “silly” or “picky” or “radical” or a “women’s libber.” Some traditionalists still insist, “we like the old, old words.” The comfort of the familiar overrides the spiritual need of women and girls to hear the good news in language that embraces us.

How hard is it, really, to sing “Good Christian Friends Rejoice” instead of “Good Christian Men Rejoice”? What petition are women supposed to be making as we sing “Dear Lord and Father of Mankind”?

For you see, we girls don’t automatically translate “men” to mean us. Right out there, in the church hallway, is a sign that says “MEN” on a restroom door. That sign clearly means males only. The “MEN” door leads to a place with exclusively male-specific plumbing fixtures arranged to be male-friendly. The place is decidedly female-unfriendly. (We like stalls, thank you very much.)

That door is one of the doors that is indeed closed to us. The sign on the door says “MEN” and it means men. We don’t automatically or easily translate the word “men” to mean “everyone.” Girls don’t do that.

Even some otherwise liberal congregations are just not ready to use language that reflects the people in the pew and those we wish were there.

Let’s set aside, just for today, the need for culturally relevant language that speaks to people born in the 20th and 21st centuries.

Let’s not ask, at least not right now, for language that proclaims as good news the full range of fully-biblical metaphors and similes for God.

Let’s not even demand, yet, that Sarah’s story always gets told with Abraham’s, that Hannah’s story is told alongside Samuel’s.

Let’s simply agree, with our language, to include all human beings — male and female — in the language we use in all of church life. Let’s not ever let inclusive language be labeled “politically correct.” In the church, language that includes all God’s people is just simply correct: grammatically correct and theologically correct.

And then let’s move onto the next liturgical language frontier.

Because, everywhere, there are all kinds of people straining to hear God’s voice saying to each and every one, “You can do that.”