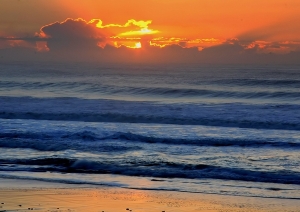 See the Light of God Revealed

Our gospel today gives us a picture of a church. It’s a church which had no fancy organ, or even an old upright piano. No choir. No pastor, even.

In fact, it’s a picture of a most miserable little gathering. How could they even take upon themselves the name, “church”? We see the disciples of Jesus, gathered after his resurrection. Here is the church at its worst — “scarred, disheartened, and defensive.”[Tom Long] [1]

How can these fearful followers even be expected to keep on following a Jesus who had disappeared – not just dead but dead and gone – gone from their sight.

We just celebrated “He is risen!” last Sunday.  Just like those disciples — we have been told that Jesus is alive!  Mary Magdalene went and told us, just as she “went and told the disciples that she had seen the Lord.  She also told them what he had said to her.”  The disciples in that Upper Room mourned that Jesus was dead and gone; we celebrate that he is risen indeed!

How can they believe in a risen Christ they haven’t seen?

If only Thomas could see Jesus for himself . . .

Thomas wasn’t the only disciple who needed proof.  All of the disciples were stuck in disbelief until they could see Jesus for themselves.

One of those 10 disciples who got to see the risen Jesus for himself was John.  And this gospel story of Jesus has John’s name on it – literally — John wrote it – and he had a purpose in writing this gospel good news story of Jesus – “written so that you may come to believe that Jesus is the Messiah, the Son of God, and that through believing you may have life in his name.”  Believe – so that you may have life!

They probably looked at John with curiosity and disbelief:  “Easy for you to say, Grampa John.  YOU saw Jesus.  YOU walked with Jesus.  YOU saw him risen – so YOU SAY.  How can WE believe when we have not seen?”

For remember that John’s good news gospel is – “written so that you may come to BELIEVE that Jesus is the Messiah, the Son of God, and that through believing you may have life in his name.”

Don’t we know – if we are as honest as Thomas was – don’t we KNOW – that right belief does not lead to life?

Whether it’s right belief about who Jesus was –

or right belief about the best economic recovery options –

or right belief about a pressing issue in church life –

In both Greek and Latin the meaning of BELIEVE was to give one’s heart to.

John wrote so that we might come to give our hearts to Jesus – God’s anointed – God’s Son — that through giving our hearts away – we might have life in his name.

Give your heart away …

According to church tradition that same John wrote the letter we call 1 John.  We can hear his same purpose declared in this 1 John letter: “we declare to you what we have seen and heard so that you also may have fellowship with us; and truly our fellowship is with the Father and with his Son Jesus Christ. We are writing these things so that our joy may be complete.”

John doesn’t use the word “believe” here – but rather he VERY CLEARLY uses heart language – he is writing with a clear goal in mind – RELATIONSHIP – fellowship together – fellowship with God – KOINONIA – intimacy – and complete joy (grace, thanksgiving).

And SO BEGAN the VERY FIRST Easter season –

so began the community of the Risen Christ –

not a RIGHT BELIEF community but an OPEN HEARTS community –

And I would love to tell you that means easy sailing for the Christian community.  I would love to tell you that to accept Jesus as Risen Lord means the end of misunderstanding – the end of missteps – the end of miscommunication – the end of mutually-inflicted misery among those who live in the light of the Easter message.  The fellowship possible to enjoy with one another in the church is the fellowship of sinners, forgiven sinners.  And “sinner” doesn’t just describe all those OTHER people – John holds up the mirror so that EACH of us can see OURSELVES reflected in the light – “If we say we have no sin we deceive ourselves, and the truth is not in us. If we confess our sins, he who is faithful and just will cleanse us from all unrighteousness.”

HONEST – like Honest Thomas — confessing doubt – yes, even sin – opening hearts to the light of fellowship with God and with one another.  John is pretty down to earth here.  To live in the light of God is to know that even our disillusionment with each other is itself sin.  How easily we forget to remember that our fellowship is the fellowship of forgiven sinners.  How surprised we are to find out that God’s beloved community is identified NOT by shared virtue – NOT by right beliefs – we find our identity in God’s grace. (gifts, joy, gratitude)

Recently I heard of a one woman play, “Shirley Valentine,” in which a middle-aged housewife faces into her fears of breaking out of the box her life has become. She is much aware of her sagging flesh, its stretch-marks and its lines. Part of Shirley’s transformation is to claim her stretch-marks and lines as signs that she has “lived.” Instead of being embarrassed and wishing them gone, she ventures forth bearing these marks of suffering as badges of honor, of life lived.

Jesus himself reveals the light of God in a most convincing way – not after “nip and tuck” or Botox or airbrushing – but Jesus embracing our doubts and fears – all the while bearing the very real wounds of living his own life fully and faithfully.  Believing is LIVING — living life in His Name.  Thanks be to God!